Controversial Afia Schwarzenegger has been in the news recently for all the wrong reasons.

She had made it clear, that her twin sons would not marry any girl from Ghana and caused the breakup of her son and his girlfriend.
She also stated that her sons would not hesitate to ‘chop’ you if you threw yourself at them.

And now the self acclaimed comedienne has compared herself to the Queen of England.
Afia posted a photo of in the early hours of Tuesday, in which Queen Elizabeth was looking scrutinisinly at Meghan Markle, the wife of English royal family member, Prince Harry. 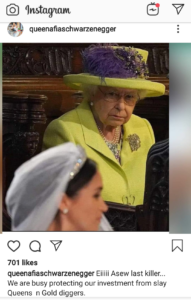 This is a reference to Afia keeping her sons away from all women in Ghana, as the English royal family were not in favor of Prince Harry marrying Meghan Markle since she was a divorcee.

Most royal families would not permit a member to marry someone who had been divorced.