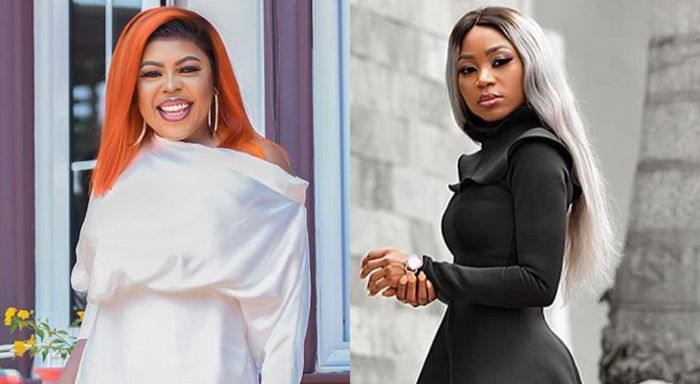 The whole drama about the disturbing viral video of Akuapem Poloo has taken a rather sharp turn in the last 24 hours following earlier reports that one jilted lover started circulating the video on social media.

In a strange turn of events, the social media star has in video sighted by thegossipmall.com accused four people (Susan Charles, Afia Schwar, Naana Brown, and Archipalago) of masterminding her downfall in the entertainment industry by releasing her private video onto the internet.

According to Akuapem Poloo in an interview with Sammy Kay, her former Nigerian best friend, Susan Charles recorded the video and sent it to ‘East Legon’s landlady’ Tracey Boakye and Afia Schwar because she was aware they had her following her recent association with Mzbel.

Akuapem Poloo added that Afia Schwar and Tracey Boakye could not share the video themselves as such, they contacted Naana Brown and Archipalago, all in the UK to spread it online just to shame her.

Ghana’s self-acclaimed queen of comedy, Afia Schwarzenegger after chancing on these wild allegations has quickly replied Akuapem Poloo with some fire,

In a Facebook and Instagram page of Afia Schwar, she denies having any hand in the release of Akuapem Poloo’s disgusting video and warned her to leave her name out of her drama because she is richer and famous than her.

Afia Schwarzenegger went ahead to drop screenshots of Akuapem Poloo begging in her DM to post a half-naked photo of herself and son and insult her on Instagram for her to trend just to emphasize that she earns nothing by shaming a ‘small bird’ like her in the entertainment industry.

“Sometime 2017 you sent me this to insult you so you can trend Instead I made you my lil friend so u can achieve the fame u want positively ..And guess what after giving you that fame,you decided to back bite me to people I work with…..oh yes I have your chat with pinamang cosmetics and all the pictures u circled to her for her to see my black elbow…but u refused to circle your tiger skin to her.. Did I come on social media to call you out?? Cos you are not worth my time and my brand..you are not worth my platform What will I gain from circulating that disgusting nudity of yours. …for fame or for money?? I am famous n richer than you and dnt need you for anything,infact my children are famous n richer than you… Let me warn you for the last time….you are Not my mate,nor class…Take my name out of your mind and mouth.”

0
In what appears to be a very hot beef between two of Ghana's top slay queens, Mona Gucci and AfiaSchwarzegger and Mona Gucci, Mona...
Read more
Showbiz

Lilwin Likes Trouble; Check Out His Reaction To The Arrest Of Funny Face (Video)

0
It seems Ghanaian actor and singer, Kwadwo Nkansah Lilwin does not like his peace of mind in this country. Even though Funny Face has stated...
Read more