Newest information in town has it that, President Nana Addo Dankwa Akuffo Addo, has told Daniel Yao Domelevo, the Auditor-General, to retire from office.

The auditor-general was on leave last year for 167 days by the order of the president. However, after he was about to return to office following the end of the leave, the president has now told him to retire since his retirement age was due.
The office of the President released a letter which thanked Mr. Domelevo for his services to the country.

Read part of the letter below

“The attention of the President of the Republic has been drawn to records and documents made available to this Office by the Audit Service, that indicate that your date of birth is 1st June 1960 and that in accordance with article 199 (1) of the Constitution, your date of retirement as Auditor-General was 1st June 2020.” 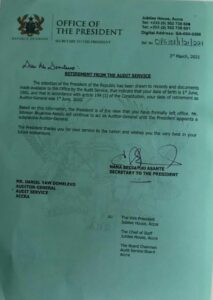 “Based on this information, the President is of the view that you have formally left office.”