Benin: The Birthplace Of Voodoo

Benin is the place where the Voodoo, or Vodou, was born and today is the official religion of the country; voodoo means “soul” or “strength” in Fon, and at the time of the Kingdom of Dahomey it has had its maximum development and has remained unaltered over the centuries, although in the period of the European colonization this religion is said to have been demonized.

Voodoo has spread as far as Brazil and Haiti in South America due to abundant slave trades during the earlier centuries. But the actual birthplace of Voodoo is the small country of Benin in West Africa. More than half of the population still practices the 10,000-year-old religion in modern times, despite being exposed to Christianity and Islam.

Outsiders refer to the Voodoo religion as a dark, fetish religion and black magic or witchcraft. But for the people of Benin, Voodoo is a way of life and faith. That is why every Jan. 10, Benin celebrates the annual Voodoo festival in the capital Ouidah, the former slave port during the Atlantic slave trade. Thousands of foreign visitors visit the country during this time to witness out of this world ceremonies and find the most unusual merchandise in Benin’s fetish markets, including pythons and preserved skulls of dogs, elephants, goats, monkeys, and even of humans.

During the festival, thousands of Beninese of all classes from the provinces and rural areas who belong to the Voodoo religion come together and travel to Ouidah to be blessed by the capital’s chief Voodoo priest, Daagbo Hounon Houna. Despite the worldly perception of Voodoo as evil or black magic, the religion’s ceremonies and rituals are actually more of “good magic,” as good spirits are preferred to be summoned by Voodoo priests because they are believed to be more powerful than bad spirits. In order to gain the blessings and approval of the spirits and dead ancestors, animal sacrifices, most commonly of goats, are usually involved.

Followers of the Voodoo faith are known to practice animism, making the python a very sacred and thus highly worshipped creature. Killing a python is believed to become a cause of one’s death. Voodoo is also a matter of worshipping natural forces such as air, earth, fire, and water.

It is said to have none of the negative connotations it has in the West and many of those who are officially Christian or Muslim also incorporate some Voodoo elements into their beliefs, especially in times of crisis.

Voodoo gods
Mahou is the supreme being
There are about 100 divinities – or Voodoos – who represent different phenomena
Gou – such as war and blacksmiths
Sakpata – illness, healing and earth
Heviosso – storms, lightning and justice )
Mami Wata- water
But Voodoo is more than a belief system, it is a complete way of life, including culture, philosophy, language, art, dance, music and medicine.

The Voodoo spiritual world consists of Mahou, the supreme being and about 100 divinities – or Voodoos – who represent different phenomena, such as war and blacksmiths (Gou), illness, healing and earth (Sakpata), storms, lightning and justice (Heviosso) or water (Mami Wata).

Voodoo priests ask these gods to intervene on behalf of ordinary people but local adherents stress that they have nothing to do with sorcery or black magic. People here do not stick needles into dolls to cause misfortune to their enemies, as you see in some Western films – this image may have arisen from the icons of a particular god which a priest may have in their shrine.

Some Voodoo priests use herbs to cure the sick – and possibly to poison enemies. They also sometimes ask for offerings, such as a chicken or a sheep, which is then sacrificed to the divinity, or some alcohol is poured onto the floor. This can happen when asking for help or when you wish has been granted. People seek help on a variety of issues – to be cured of a disease, find a job, complete a business deal, find a spouse or have a child.

VOODOO MARKET OF BENIN
This market sells anything associated with voodoo, including varieties of tree barks and dried plants (both used in traditional medicine) and stalwarts for voodoo rites, such as dried animal parts, particularly skins, heads and hoofs (anything from ducks, turtles and horses to dogs and monkeys). Live rats and fish often make an appearance, as does hand-carved wood. 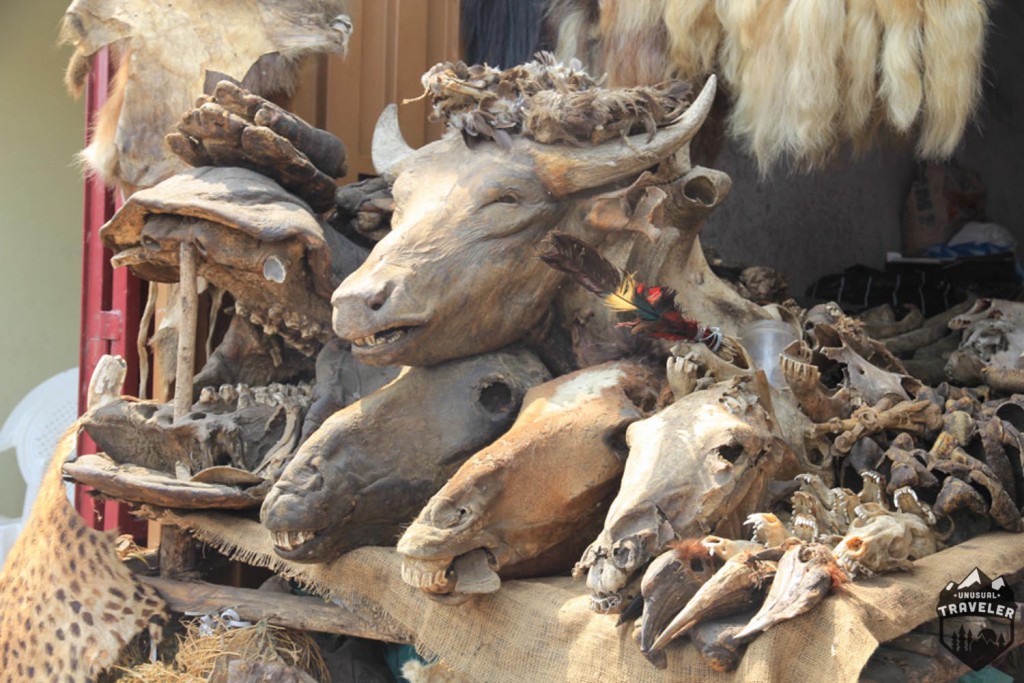 The unsavory smell (rotting animal parts, damp, moldy items) will greet you before you enter this section of the large Grand Marché de Dantokpa. All fetish items will likely be handed to you wrapped in cloth so your hands will not directly touch your purchase.

Below a video from “Global Vision Africa” of the Benin Voodoo Market
If you are sensitive to live snakes, dead animals, etc we suggest you do not watch the below video.

Ceremonies cost around 200 Euros, a fortune in a country where over half the population live on less than 1 Euro a day. High priests of Voodoo convents deny enriching themselves at the expense of the poor. They say the money does not go to them but insist that all Money is used to buy goats and chickens and other ceremonial ingredients. The concept of reducing the cost of the sacrifices is laughable as priests have done this for years and rate that “Whatever Voodoo demands, Voodoo must get”.

Benin’s poverty has been caused by factors including arid soil, over-population and disastrous financial management in 17 years up to 1990 when it was a Marxist dictatorship. At best, voodoo ceremonies strain the resources of rural communities who traditionally bartered goods, not cash, for rituals. At worst, it bankrupts and splits families, forcing them deeper into debt and destitution.

One way to mitigate the worst effects of poverty is to sell children, giving them up in lieu of the costs of initiation and other ceremonies. Other parents send their children to work as domestic servants or labourers in conditions that Souleymane Diallo, the UN Children’s Education Fund representative in Benin, describes as ‘a form of modern slavery’.

Diallo believes many families will pay for initiation debts by selling one or more children into bonded labour. Research suggests 40,000 children are trafficked into labour in Benin every year and also to quarries in Nigeria where they are routinely beaten, starved and work gruelling shifts breaking rocks.

One self-confessed child trafficker estimates his family-run business has brokered the sale of more than 3,000 to work as servants and labourers in ‘the last few years’.

Eric Abou, a Muslim, adds: ‘My mother is undergoing initiation. It’s very expensive, and she is not allowed to leave the convent until I have paid for the ceremonies.’ The suggestion that he might leave her there and save some money – and sell fewer children – is greeted with a nervous laugh. Voodoo is serious business.