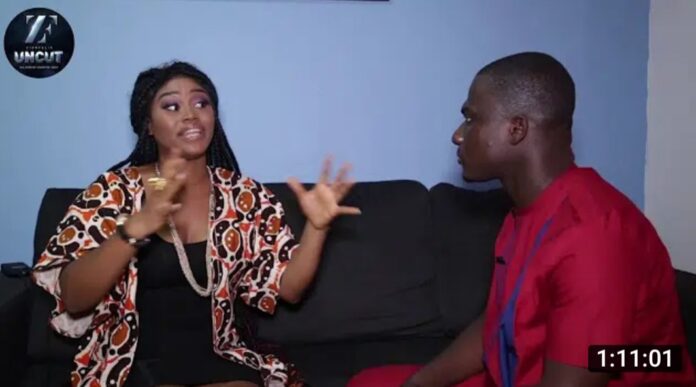 The brouhaha concerning singer eShun and her former manager and fiancee Quophimens continues as the singer has come out to clear the air on some allegations levelled against her by her former lover.

The singer in an interview with Zionfelix.net revealed that her relationship with Quophimens went abound a working relationship as they were lovebirds who were planning to marry.
She however, revealed that after she accepted to move from Accra to stay at Cape Coast upon QuophMens’s request, the latter still demanded she EShun stayed with him in one house.
According to eShun she did not agree to the request and that was the beginning of abuses she suffered from her former boss and fiancee.

She further revealed that she already has a child and after being abused and maltreated severally by her man she cheated twice and she did this out of frustration.

Eshun made several revelations which include how her man chained her with fear by threatening her with death and others.

REVEALED! Dr. Owusu Fordjour, man at the center of fake UN Awards given to Sarkodie and friends is a hardened scammer and criminal who...

0
It has surfaced that the fake Dr. Owusu Fordjour who scammed Sarkodie and friends with a fake UN/Kofi Annan Global Excellence in Leadership Awards...
Read more
Showbiz

0
Seasoned Ghanaian media Journalist, Bridget Otoo, has taken a swipe at her critics with a savage comment that has gotten them reeling backwards. The media...
Read more