Bridget Otoo has been one of the loud campaigners for the legalization of same-sex marriages in Ghana because she believes that such people have rights too.

In her continuous crusade for the legalization of the act, a lot of social media users who are against it have been bashing her.

One such person on Twitter decided to tag her as a lesbian herself because of her insistence that it should be legalized in Ghana.

The guy who is identified on Twitter with the name GhKingDavid1 asked ‘Are you a lesbian’.

But in her quick reply to the guy, Bridget Otoo decided to leave the guy in tears and social media users in Shock.

The former TV3 presenter savagely told the guy that she is actually a lesbian. She sarcastically added that she does it with his mom and sometimes his sister also supports them.

See a screenshot of this below 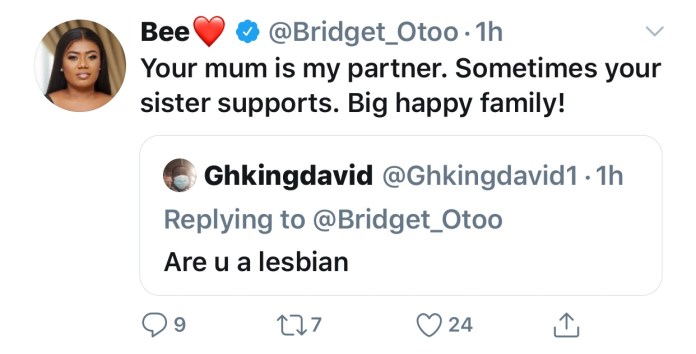