American super star singer, Beyonce, has broken the Grammy record for the most Grammy awarded female singer, after she took home her 28th Grammy Award On Sunday Night, after giving a performance of her song ‘Black Parade’, which was adjudged as the best R&B performance.

“I am so honored, I am so excited. Thank you guys,” Beyoncé said, holding back tears. “As an artist, I believe it’s my job, and all of our jobs to reflect the times, and it’s been such a difficult time. So I wanted to uplift, encourage and celebrate all of the beautiful black queens and kings that continue to inspire me and inspire the whole world.” 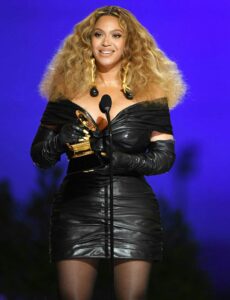 The ‘Halo’ singer now ties with Quincy Jones as the second most Awarded people in Grammy history.

The overall record for the most Grammy wins is held by George Solti, a Hungarian conductor with 31 wins.

Nigerian music super star, Burna Boy, has clichéd a Grammy award with his album dubbed ‘Twice As Tall’. The…

Nigerian music star, David Adedeji Adeleke, better known as Davido, has adviced his fans to help the people around…

American Rapper, Bobby Shmurda was released from prison less than two weeks ago. However, according to TMZ, the rapper…

Ghanaian football legend and former Chelsea midfielder, Michael Essien, has lost more than half of his social media followers…

Elon Musk’s Fortune Depletes By $15.2 Billion In A Day

American tech billionaire, Elon Musk, has seen his wealth reduce by a whooping $15.2 billion, after he made comments…

In a viral report filed by Instablog9ja, it details how a 32-year-old woman, Victoria Chekwube (she also a prostitute)…

From Prison, Hushpuppi fires his lawyers; Here is why

It has emerged that alleged notorious fraudster, Hushpuppi has fired his lawyers, Mr Gal Pissetzky and Vicki Podberesky from…

Information reaching thegossipmall.com has it that some Suspected Fulani herdsmen have laid ambush on travellers plying the Benin-Ore road…