Following the huge embarrassment, some top Ghanaian celebrities like Sarkodie, Berla Mundi, D-Black, Chairman Wontumi, Captain Smart, and others have suffered in the hands of social media users after it emerged that they were allegedly given some fake “UN Kofi Annan Excellence Awards”, some of they have shyly gone to their pages to delete the pictures they took and shared on their respective Facebook and Instagram pages.

Broadcaster journalist and events MC, Berla Mundi was the first in the tall list of these celebrities to delete these embracing photos to slow down the trolls which were coming her way.

It did not take too much time for rapper DBlack to join her on the path of serving some face as he also hurriedly deleted the photos.

Before the Black Avenue Music boss did, however, he initially dropped a rather hilarious tweet that reads: “Rubbish. I dey come delete am” 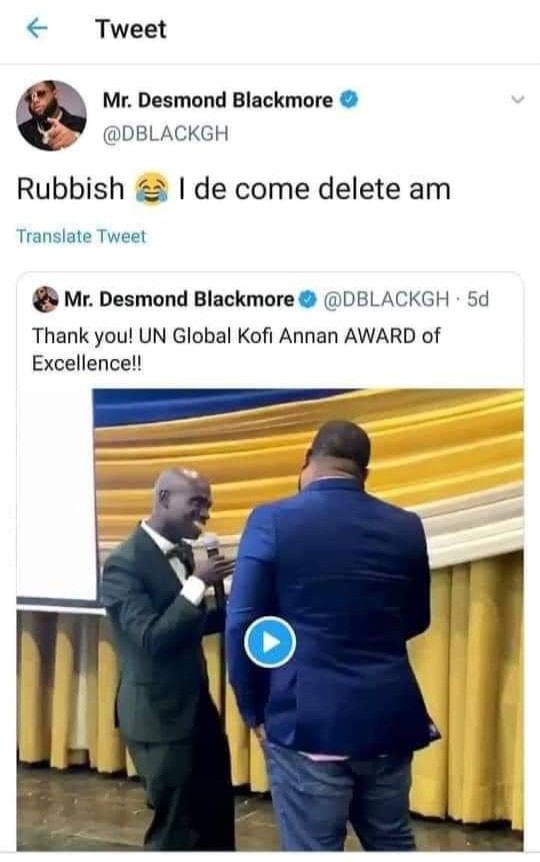 We can also confirm that broadcast journalist Natalie Fort of Media General has also deleted the photos from her page with the speed of a thunderbolt.

Well, the lenses of thegossipmall.com are sharply monitoring the pages of the other top celebs who have allegedly been caught in this web of deceit to see if they will follow the footsteps of Berla Mundi and D-Black.

Until then, let’s state on record that the man behind the rather big scam, Dr. Fordjour, is yet to speak on how he was able to lure celebrities and public officials to show up for a fake United Nations and the Kofi Annan Foundation Awards.