The boss of Black Avenue Muzik, Desmond Blackmore aka D-Black has slammed broadcaster, Bridget Otoo for deciding to bring up the name of his daughter during their online feud.

Bridget Otoo while trying to respond to a statement D-Black passed in relation to a tweet of hers brought up D-Black’s daughter.

READ ALSO: Funny Face shares Hilarious Video Of Himself And His ‘Machine’

According to Bridget Otoo, the fact that the award-winning musician supposedly had a problem with her for questioning the President of the land over a portion of his 64th Independence day speech shows that he (D-Black) was not trained to ask questions when the need arise.

She further added that D-Black should not give that type of training, which she described as a tragedy, to his daughter. 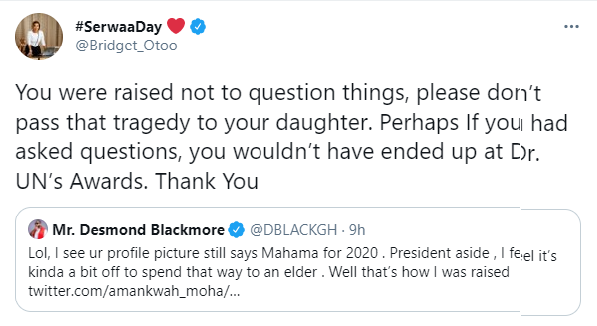 READ ALSO “I Am Still Being Haunted By Family Dwarfs. Obinim Prayers Did Not Work” – Pamela Odame

Even though it has taken some time, D-Black has responded to this comment made by Bridget Otoo.

In a reply to a tweet who said the former TV3 news anchor crossed the line with the introduction of the daughter of D-Black into the whole discussion, he stated that she will only get that understand when she finally has a child of her own.

Sir, She won’t get it till she has a child of her own so it’s fine. https://t.co/oFPQ1KbBQP