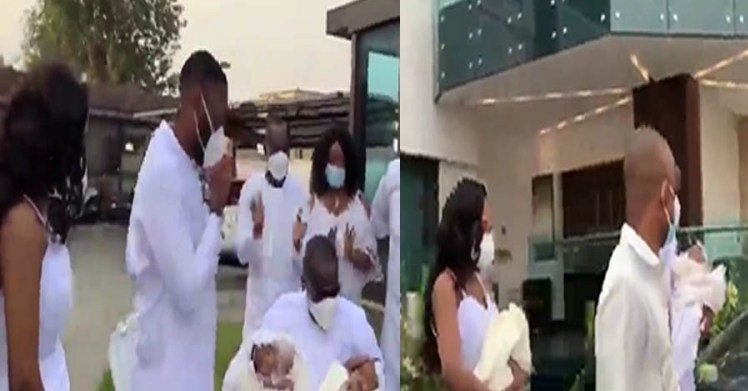 The son of business mogul, Dr. Osei Kwame Despite, Kennedy Osei Asante and his wife Tracey, have publicly flaunted their twins for the first time.

Reports about Kennedy and Tracey welcoming twins after their lavish wedding ceremony went viral some months ago.

Even though they publicly failed to either confirm or deny the reports at the time, on the occasion of Dr Osei Kwame Despite’s birthday today, the couple presented their twins to him in a video sighted online.

Kennedy and Tracey were led by Fada Dickson when presenting the twins to their grandfather.

People who were present at the ceremony taking place at Dr Osei Kwame’s East Legon mansion cheered them up excitedly.

“Amen! Amen!! Amen!!!” some of them exclaimed amid clapping.

Congrats to Kennedy and Tracy.

0
Abena Korkor has exposed Eugene Osafo Nkansah popularly known as Nkonkonsa for what he did on Peace Fm this afternoon. The Despite Media personnel made...
Read more
Showbiz

0
It's no secret who the famous blogger Zionfelix is dating. We all know he's dating Mina, a beautician who owns the Minalyn touch brand....
Read more
Showbiz