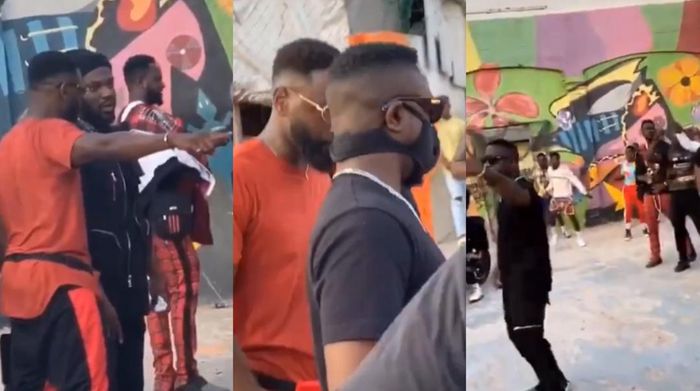 After the heavy trolls, he has received on social media following the huge embarrassment his personality was hit with over the fake ‘Dr. Fordjour’ UN/Kofi Annan awards, another fan tried to disgrace him in public.

At a video shoot with his colleague Tema based musicians, R2bees, the fan out of the blue yelled at him to stop being stingy.

From a video sighted by thegossipmall.com, the fan was heard in the crowd telling Sarkodie to be generous and gift out stuff to his fans occasionally as other musicians have been doing.

READ ALSO: Shatta Wale Exposes D-Black Big Time Over The Fake Dr. UN Awards As He Spills All The Beans In A Must Video

While the multiple award-winning rapper might have felt embarrassed after hearing the fan shout at him, he kept his focus on the video shoot and delivered as expected.

Anyway, this is actually not shocking because, over the years, a lot of fans have the perception that Sarkodie is stingy.

Check out the video below…

0
Pastor love who has recently been exposed and accused under the cloak of the bible to deceive his followers and been accused by several...
Read more
Showbiz

0
The practice of creating social media accounts for celeb babies became part of pop culture in the Americas and Britain not long. Sooner than later,...
Read more