READ ALSO: Delay Reveals The Shocking Thing Wendy Shay Has Done To Her Because She Blasted Her New Weird Lifestyle

Disgracefully, Coded instead of writing ‘by’, wrote ‘bye; as if he is bidding farewell to someone.

Although we all know that English language is no our language, it is however, unforgiving for Coded 4X4 to commit such a mistake involving just two letter word which can be instantly spelt by a kindergarten kid. 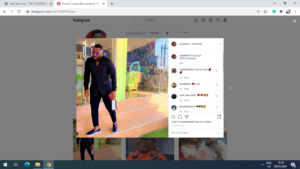