A female football referee in the Ashanti Region found herself in the wrong place after she was beaten by a player during a football match.

Reports has it that the player, who plays for the Fabolous Ladies soccer team, attacked the referee during a match against Kumasi Sports Academy. 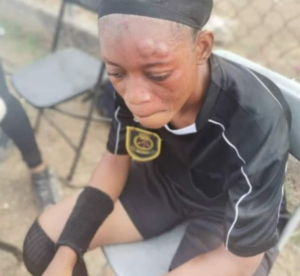 The referee, name given as Faizatu Jakpa, was beaten up after a misunderstanding erupted during the match. It is still unclear what actually caused the player to deliver such beatings to the referee.

Kevin
Previous articleLISTEN: Construction site workers tell Lydia Forson in the face to get married
Next articleStonebwoy Laments After He Was Asked To Pay GHS 1,200 For An Imported Sneaker

0
Ghanaian media personality, Nana Aba Anamoah, is known to be generous at helping to people she normally thinks to deserve it. The seasoned broadcaster...
Read more
General News

0
Outspoken government critic, A Plus, has been trolling Ghanaians after it was revealed that Ghanaians were now going to pay for the free water...
Read more
General News

“Workers In Ghana Are More Corrupt Than Politicians” Kennedy Agyapong

0
Member of Parliament for Assin Central, Kennedy Agyapong, has stated that, contrary to popular belief that politicians are corrupt, it is rather the workers...
Read more
General News

0
A Plus has hit hard at the ruling government once again over the new taxes they have introduced to force the people of Ghana...
Read more

0
DJ Lord is one of the most renowned. Disc Jockeys in Ghana. He’s done an amazing job in the country when it comes to...
Read more

Married Princess Shyngle Shares Int!mate Videos Of Her Time As Lover Of Burna Boy Online Just To Share In His Glory As A Grammy...

0
Princess Shyngle who recently got married to one of the richest dudes from his home country, The Gambia appears to care more about Burna...
Read more
International

0
There is news of a man who has murdered his own grandmother and presented the head to the police as proof of the crime....
Read more
Hot Gossips

Stunt? Check Out What A Close Confidant Of Akuapem Poloo Said About Her Supposed Wedding At Alisa Hotel Today

0
Earlier today stunt queen, Akuapem Poloo flooded her Instagram pages with videos of herself in a wedding gown, fully made-up, and surrounded by other...
Read more