Budding Ghanaian female singer, Jackie Acheampong, better known in showbiz as Gyakie, has announced that she would be releasing the remix to her hit song, ‘Forerver’ on March, 19.

The singer also disclosed during her announcements, that the new song would feature Nigerian singer, Omah Lay.

Gyakie,  who is the daughter of Ghanaian Highlife veteran, Nana Acheampong, revealed the news to her fans on her social media page.

The singer is currently on tour in the Nigeria. 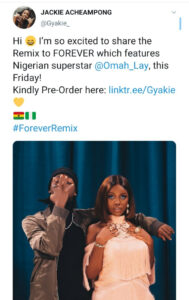