A young girl who was used as a bomb courier in an attempt to assassinate Dr. Kwame Nkrumah has revealed that she now lives in pain since that fateful day.

The assassination attempt happened on March 6, in 1964, when Madam Elizabeth Asantewaa was then a 13 year old girl. She was given a bouquet of flowers by one Mallam Toura, to present to president Nkrumah at the independece Square.

She did not know that a bomb had been planted in it. 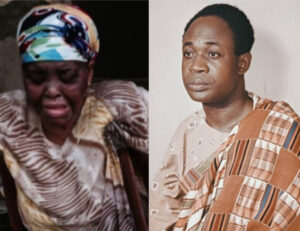 Madam Elizabeth lost her leg after.8ithe bomb went off and has since lived a life of extreme pain.

She is said to have been visited by Kwame Nkrumah who supported her until he was overthrown in a coup.

The lady revealed that she was also visited by the Crime Check Foundation and was given some items and money to make life comfortable for her.