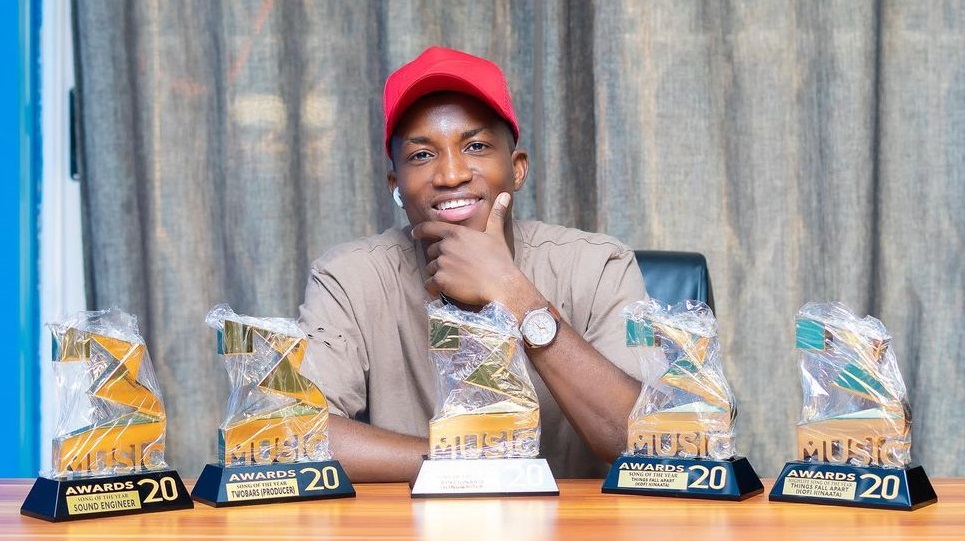 Ghanaian singer and songwriter, Martin King Arthur aka Kofi Kinaata decided to drop an epic reaction after he finally received all the plaques he won at the 2020 edition of 3Music Awards.

Some media users would have noticed that 3music Network, the organizers of the annual 3Music Awards have been paying special visits to all the winners of the respective awards to deliver their plaques to them.

Already, they have visited the likes of Sarkodie, Dope Nation, Celestine Donkor, Quamina MP, and a few others to deliver the gold-coated plaques to them.

Yesterday happened to be the turn of Takoradi based rapper, Kofi Kinaata.

After he got all the five plaques, the “Confession” hitmaker took to Instagram to drop a rather hilarious reaction.

READ ALSO: Oseikrom Sikani finally admits that the source of his wealth is from Benin

Captioning a photo of himself and all the five plaques lined up in front of him, Kinaata decided to adopt Twene Jonas’ popular sayings to thank the organizers of the awards and his producers.

VIDEO: Davido And Burna Boy Bring Their Wahala To Ghana – They Exchange Blows In A Popular Night Club

0
Nigerian musicians, Burna Boy and Davido have landed in Ghana with their lyrical beef many people thought was faked for hype, and this time,...
Read more
Showbiz

Bisa Kdei In Trouble! Mr Logic Calls On Socrates Safo And The Classification Committee To Ban His New Music Video Over Explicit Scenes –...

0
After struggling to drop a hot banger in recent times following all the successes he got in the music scene back in 2016, Bisa...
Read more