In the last 24 hours, one netizen identified as Henewaa Piesie has incurred the wrath of many Ghanaians on social media following her decision to described actress and TV presenter, Selly Galley as ugly and barren.

Her offensive comment has seen many people bash her and even threaten to make the rest of her days in Ghana an unpleasant one.

Also, Selly Galley has cursed her and her entire generation because she was very hurt.

In the midst of all the social media attacks on Henewaa Piesie, self-acclaimed queen of Ghana comedy, Valentina Nana Agyeiwaa popularly known as Afia Schwarzenegger has also decided to join the bandwagon and curse the lady too.

READ ALSO: 5 Nauseating pictures of the lady who described Selly Galley as horror and barren

Well, I find hers very strange, taking into account the fact that just four years ago, she described Delay, the lady who made her known in the Ghanaian entertainment industry as barren.

In February 2016 when their employer and employee relationship ended, Afia Schwar went ballistics on social media on some occasions and mocked Delay that she is barren and hopping from hotel to hotel in search of White men.

In one of Afia Schwar’s post mocking Delay, she said;

“Please Aunty Galatians 7,
Before u discuss me and my brothers please try and be useful by attempting pregnancy!!!!
Barrens don’t talk against fruitful women and their children…that is termed Jealousy. no wonder you are fighting children over names!
Aunty grow up wai !!!!
Blessed Sunday to all my godly Aunties and Uncles”. 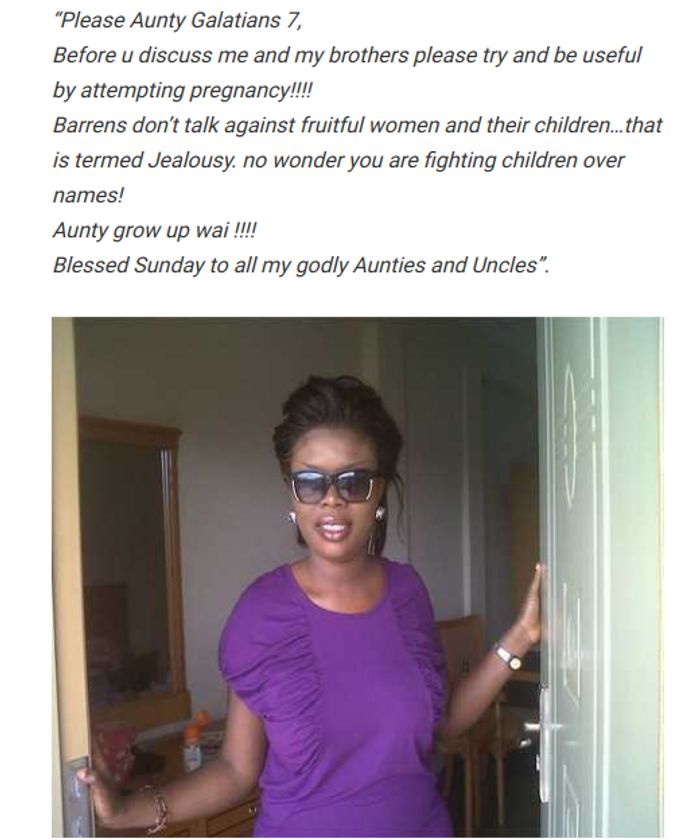 READ ALSO: Audio Curse! Gentleman Who Was Cursed By Shugatiti On Social Media Returns To Fire Her Harder

In another post, she added; “Tag the barren that is fighting children over names, committing suicide over MY X6….@penalistic_pena got a message for them!!!!”

Looking at these posts of Afia Schwar from back then, does it not come as a surprise that she has decided to act like a saint this time and curse the young lady who f00l!shly said those things to Selly Galley?

I believe that she should be the last person to have a say in this matter, unless, she is accepting the fact that she is a big-time hypocrite or she is ready for the curses of Delay.

Afia Schwar So while most of us were sleeping and snoring last night, self-accailmed queen of Ghana comedy, Afia Schwarzenegger was up at midnight cursing Henewaa, the lady who called Selly Galley ugly and barren 😂😂🤣