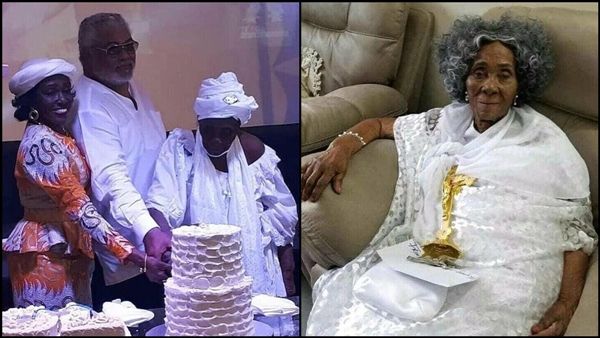 A little over a month after she celebrated her 101st birthday in a very solemn manner, a report thegossipmall.com has picked up says that the mother of former PresidentJerry John Rawlings, Madam Victoria Agbotui has died.

According to the report seen on citinewsroom.com, Madam Agbotui had been unwell for some time now.

The sources noted that Madam Agbotui had been unwell for some time now.

Born in 1919, Madam Victoria Agbotui came into the limelight following her son’s ascension to power in 1979.

She was also the head of the catering department at the presidency during her son’s reign.

Victoria Agbotui hailed from Dzelukope near Keta in the Volta Region.

0
Stonebwoy has been seen chilling with young Nigerian DJ, Cuppy on the streets of London. The dancehall heavyweight was seen in a video jamming to...
Read more
Showbiz

0
Sarkodie according to pieces of information gathered has reported Stonebwoy to the Police for beating his manager. Mark Okraku Mantey has disclosed that Sarkodie has...
Read more