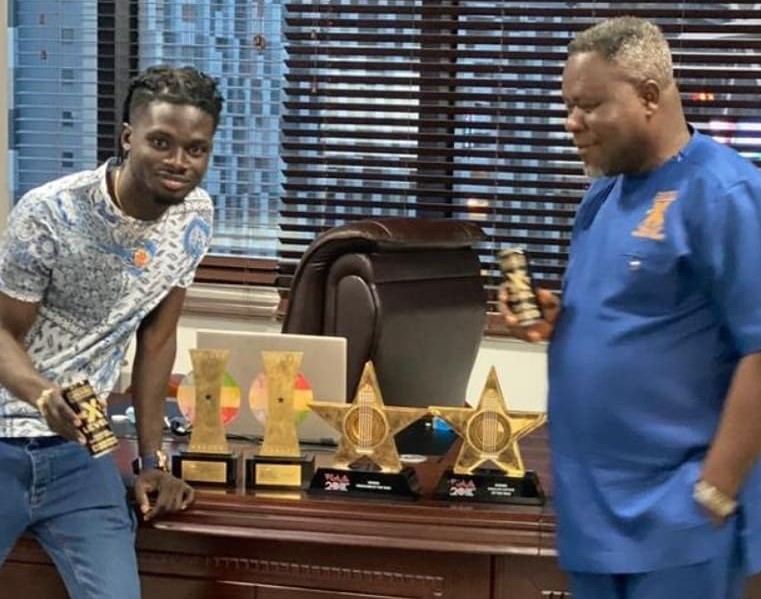 After the recent Vodafone Ghana Music Awards, one person who has been heavily bastardized for literally walking to every place with his plaque is Reggae/Dancehall musician, Ras Kuuku.

Well, it seems his colleague Kuami Eugene of Lynx entertainment has been walking the same path but he has been doing so undertone.

After he was named the ‘Artiste of The Year’, he has ensured that his pastor and church members have catch a very close glimpse of the award.

Also, he recently paid a courtesy call on the  National Chief Imam, Sheikh Osmanu Nuhu Sharubutu with the same plaque after he won.

In a video that has surfaced online, the musician is again seen chilling with billionaire Dr. Kwaku Oteng, who is the CEO of the Angel Group of Companies as they gulped down some cans of the new Adonko Next Level energy drink.

It should be noted that he was recently named the brand ambassador of the energy drink, which might be why he decided to pay this visit to Dr. Kwaku Oteng with the award.

Check out the photos and videos below, make sure you swipe for all

EXCLUSIVE: See Photos Of Amerado’s Beautiful Fiancée And Adorable Young Daughter For The First Time Ever

0
The Ghanaian entertainment industry is sharply divided among people of two different personalities. While a particular faction does not mind putting their private business out...
Read more
Featured

0
Asamoah Gyan is a Ghanaian footballer born on 22nd November 1985, in Accra to Cecelia Amoako. He has two siblings; Baffuor Gyan and Opoku...
Read more
Showbiz

WATCH: Ras Kuuku and Counsellor Lutterodt in a fierce fight over marijuana

0
Puom chanter and reigning Reggae/Dancehall Artiste of the year had a fierce clash with loudmouth Counselor Lutterodt over the legalization of weed in Ghana. The...
Read more