A social media user identified as El Shady Nile has shared his painful experience as to how workers of the Ghana Ambulance Service at extorted money from him after using the Ambulance service.

According to El Shady Nile who shared his experience on Facebook, the workers of Half Assini Government Hospital in the Jomoro District of the Western Region demanded that he pays for the fuel and cost of washing the ambulance before using the service.

Checks by Thegossipmall.com revealed that he was made to pay an amount of GHS180.00 to convey a pregnant woman in labour from Half Assini to Eikwe hospital, a journey less than 30km.

Today we were supposed to use the services of the Ghana National Ambulance, they charged us money for fuel and for washing the car. I’m still wondering what will happen to people who cannot afford it.
Ano dey barb

This raises questions as to whether usage of Ghana’s national Ambulance is free or not. 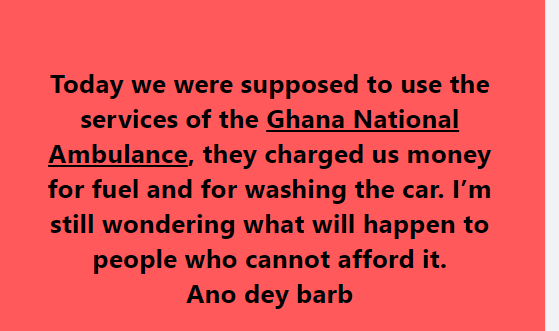 READ ALSO: Kofi Anaman claps back at ex-president Kuffour over his anti-Nkrumah statement