Medikal Going Broke. Begs Fans To Buy His Music So He Can Feed His Family

Ghanaian rapper, Samuel Frimpong, Popularly known as Medikal, or El Chairmano, seems to be going broke now after flaunting cash on numerous occasions in the past.

The rapper,  who purchased a very expensive cuban link chain some few months ago, has given hint to his fans that he could end up broke anytime soon.

Medikal posted a tweet on his twitter handle in which the rapper is seen begging his fans to purchase his newest EP so that he could get money to feed his family and and continue his flexing lifestyle.

The rapper needs money so he can buy an island for his Island, his daughter, and his wife Fela. 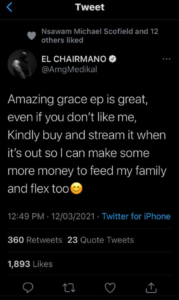