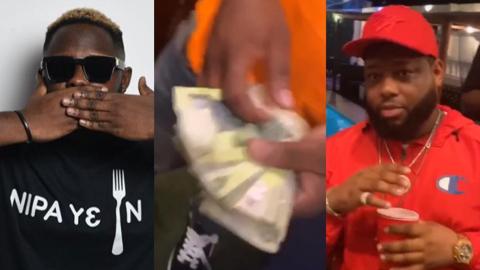 Arab Money Geng signed musician, Medikal walked away with a cool Ghc1000 last night after he defeated his colleague and the CEO of Black Avenue Muzik, Desmond Blackmore aka D-Black in a FIFA match competition.

While the amount D-Black lost last night can be described as chicken when one takes into account the millions of cedis he is worth, his plight last night can be seen as a humbling one because he was the one who called for the face-off.

READ ALSO: Yaa Jackson Dragged Onto Social Media For The Humiliation Of Her Life By Hairstylist She Owes Ghc600 For Hair She Bought – Watch Videos

Well, in the end, it became very clear that D-Black was no match for Medikal.

In the video below, after Medikal made a mockery of D-Black, the “Vera” crooner also brought back his sad experience with Dr. UN.

SCREENSHOT: Keche Andrew claps back at fan who says his recent pictures are more than his recent songs

0
One half of music group Keche has savagely replied a fan who tried to step on his toes by casting insinuations that the Keche...
Read more
Showbiz

0
Barely 48 hours to the 2020 general elections in Ghana, a secret phone recording between actress Tracey Boakye and musician Mzbel has been leaked...
Read more