Earlier this morning reports that Michy, the former lover of top Ghanaian Reggae/Dancehall, Shatta Wake has got herself a new mansion was reported on many blogs in the country.

This information became public knowledge after Shatta Wale posted a congratulatory message on his Snapchat. In that post thegossipmall.com reported on earlier in the day, Shatta wrote: “Congrats Shatta Michy on your new house. Am so happy for you.”

READ ALSO: PHOTO: Moesha Buduong set to stop chasing sugar daddies after finally getting featured in a movie for the first time in over 3 years

Well, it seems that the Michy’s Hideout CEO wanted that information to be kept and a secret and not ‘leaked’ onto social media by people in her close circles she made aware, especially her ‘sweet-ex’, Shatta Wale.

Hence, she decided to adopt a sweet and equally savage way to reply to Shatta Wale when she took to social media to reply to his congratulatory message.

Sharing a screenshot of Wale’s post on her Instastory, Michy stated that this what people get when they have LOUD ex-lovers like Shatta Wale and thanked him for the congratulatory message. 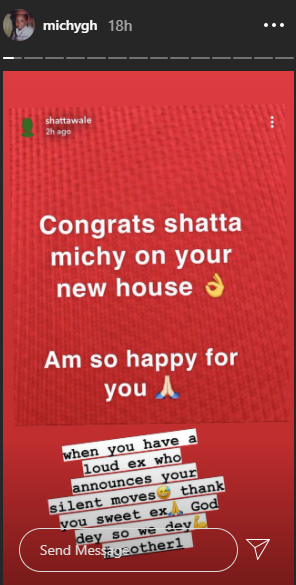