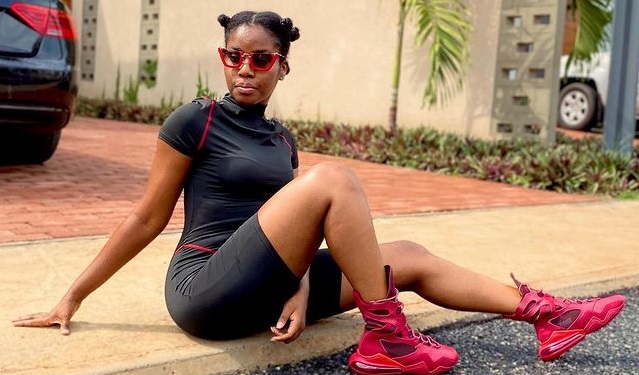 Ghanaian singer, Vera Hamenoo-Kpeda, fondly called Mzvee in entertainment circles has given her fans on Instagram something to talk about this morning with a beautiful photo of herself and her big p*$$y.

The photo sighted by thegossipmall.com has Mzvee sitting beautifully on a big motorbike that was parked in her house while she was happily holding the p*$$y.

READ ALSO: Fella Makafui Almost Slips And Loses All Her 32 Teeth As She Tries To Flex In New High Heels (Video)

Her fans have been massively reacting to the nice she has shared and expressing some level of shock.

Going through the comments, most of her fans cannot believe that a full-blooded Ewe lady has been able to keep such a big p*$$y as her pet.

They started to express this amount of shock, after Ghana’s noise-making queen, Afia Schwar brought it up.

Afia Schwar wrote the comment: “An Ewe who has a cat as a pet is a wonder to her generation 😂😂😂😂😂😂congratulations my queen❤️🏃‍♀️🏃‍♀️🏃‍♀️🏃‍♀️” 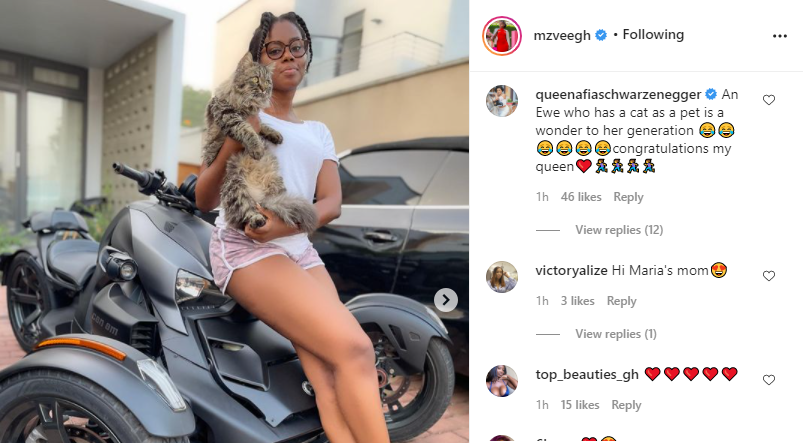 I am pretty sure all of this might sound a little funny but in Ghana, there is this perception that Ewes like the meat of the p*$$y. also known as the cat a lot, as such, all these people cannot believe that she is keeping it as a pet.

Anyway, see the photo of Mzvee and her big p*$$y below

PHOTO: Michy shows more of her curvy bortos as she swims with son, Majesty in a pool

VIDEO: Abena Korkor disturbs the internet with her beautiful beads as she whines her [email protected]

0
Abena Korkor has has served her flowers with a a very hot video of herself dancing and whining her [email protected] whiles holding some nice...
Read more
Showbiz

0
What a pity! Andy Dosty has been caught out with the 'Yawa of the night' as his torn trouser has left netizens trolling him...
Read more