Rapper E.L Announces Release Date For His Next album

Ghanaian rapper, Elorm Adablah, better known by his stage name E.L, has announced the release date for his upcoming album.

The rapper made the revelation in a post on his twitter handle. He also shared the artwork of the new album as well.

Rapper E.L has been missing from the music scene for sometime now. The ‘Ayayaa’ hitmaker is however back with new projects for his fans. 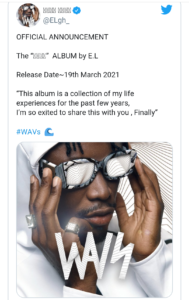