A Ghanaian rasta man, Ras Aswad Menkrabea, has revealed that his sons have been denied admission by the Achimota School due to their dreadlocks.

Read Also: “NDC Have Not Paid Me Yet”- Worlasi

The frustrated father, revealed the unfortunate incident in a Facebook. He stated that his two children were not allowed to enrol because their hair was not permitted by the school.

However, Ras Aswad Menkrabea has vowed to fight the unconstitutional rule been adhered to by the school. 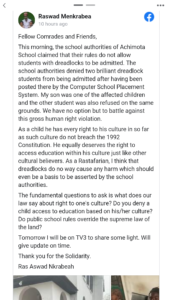