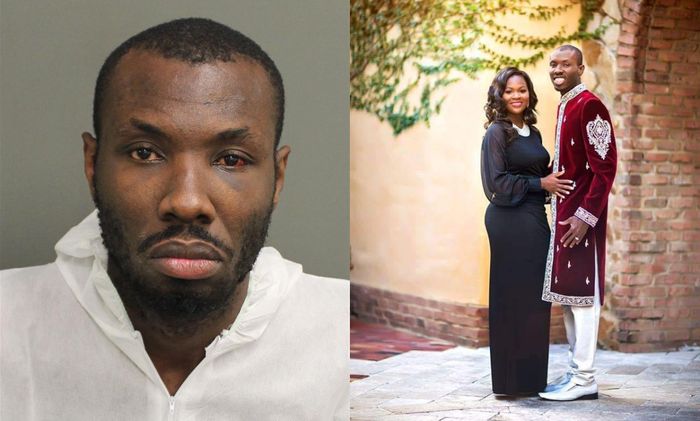 Yesterday, it emerged that a US-based Ghanaian Pastor, Sylvester Ofori shot his wife, Barbara Tommey about seven times to sadly end her life.

As the world is still in shock about the disheartening news, a new video has emerged on social media which suggests that the actions were premeditated.

READ ALSO: Sarkodie Officially Speaks About The Fake Awards Saga; Threatens To Slap Dr. UN For Making A F00l Out Of Him In “Gimme Way” ft Bright Buk Bak – Listen

In a video spotted, the supposed man of God made threats that he will kill his wife in the house of his brother in law before he finally went ahead to commit the heinous crime.

In this new video seen by thegossipmall.com, Barbara went to their marital home with her elder brother and sister to pick up some documents, and her now-imprisoned husband, Sylvester tried to attack her.

His action provoked Terry (Barbara’s brother) and he retaliated which resulted in an argument and Terry was forced to call Sylvester a fake man of God.

Sylvester who felt hurt to be called fake threatened right there before leaving the scene saying: ”if I don’t kill your sister then I am fake”.

Watch the videos below

0
Outspoken government critic, A Plus, has been trolling Ghanaians after it was revealed that Ghanaians were now going to pay for the free water...
Read more
Hot Gossips

Not Because Of Sarkodie Or D-Black Fake Awards Saga – The Reason Why Dr. UN Was Arrested Finally Revealed! (Video)

0
Earlier this evening, there was breaking news from Peacefmoline.com that popular and alleged scammer, Kwame Fordjour aka Dr. UN ha been arrested by the...
Read more
International

0
Information reaching thegossipmall.com has it that some Suspected Fulani herdsmen have laid ambush on travellers plying the Benin-Ore road in Nigeria and currently keeping...
Read more