Lucky Dube once said in his song “That’s the way it is” in 1999 that “Be good to the people on your way up the ladder because you will need them on your way down.” This wise saying has not been the case of the ‘Nothing I get’ hitmaker, Fameye. Having already declared in his song that he indeed had nothing, it was wise enough for him and perhaps the people around him to advise him not to be ungrateful to the very people who believed in him and invested their hard-earned monies to push his career to where he is today.

Fameye has been in the news for all the wrong reasons lately following the fracas he had with his manager, Ogidi Brown in Italy where he was allegedly accused of slapping the latter, an accusation he vehemently denied but though confirmed that there was an altercation between himself and his manager but was blown out of proportion.
Subsequently, Fameye started neglected OGB Music and started doing still on his won even though he had a contract with the OGB Music.

According to reports, Fameye has since had bookings without the notice of OGB Music since the incident that happened in Italy which had Fameye exchanging words with his boss and has since not given a dime to OGB Music as their share of the bookings. Ogidi Brown a record label which invested an estimated amount of GHS120,000
Ogidi Brown also claims Fameye has failed to answer his calls and subsequently blocked him in his attempt to settle the case amicably with Fameye.

Just as Ogidi Brown has finally decided to put the issue to bed by suing Fameye for breach of contract, thegossipmall.com has laid hands a piece of exclusive information which has it that Fameye was once signed by a record label called Tetepa Music, a record label at Bogoso in Western Region before his contract with OGB Music.
According to the reports, Fameye was signed for five years and it was under this record label that Fameye released Afia Bruwaa which featured Kofi Kinaata.

The reports further have it that Tetepa Music was not happy with his exit from their camp to OGB Music after investing an estimated amount of GH¢150,000 into Fameye’s career.
With the decision not to allow Fameye to leave ‘Tetepa’ Music, Fameye started showing signs of stubbornness and on several occasions picked quarrels with the team including the CEO.
To date, Fameye has not contacted Mr. Tetepa- The CEO of the record label since his breakthrough nor making arrangements to pay a dime to the label to show appreciation.

Thegossipmall.com has dug deep to authenticate this gossip given to us by an insider at ‘Tetepa’ Music and unraveled a Facebook post made by Fameye on his Facebook page perhaps to debunk rumors of his ungratefulness when he left Tetepa music and it reads, “God is watching Tetepa Music in secret, he knows all.I’m still for God, all the labels after me, God bless you all and I will work with one for sure. I’m watching you God but guys remember me in your prayers wai it’s beyond normal as it stands now. Just know I’m a winner eeeiii before I forget I’m no more working with #Tetepamusic. I’m out if you don’t understand go and ask my God in heaven and God will punish you if you say what you don’t know!!! Don’t judge. I repeat I’m no more with Tetepa Music. God is King.” 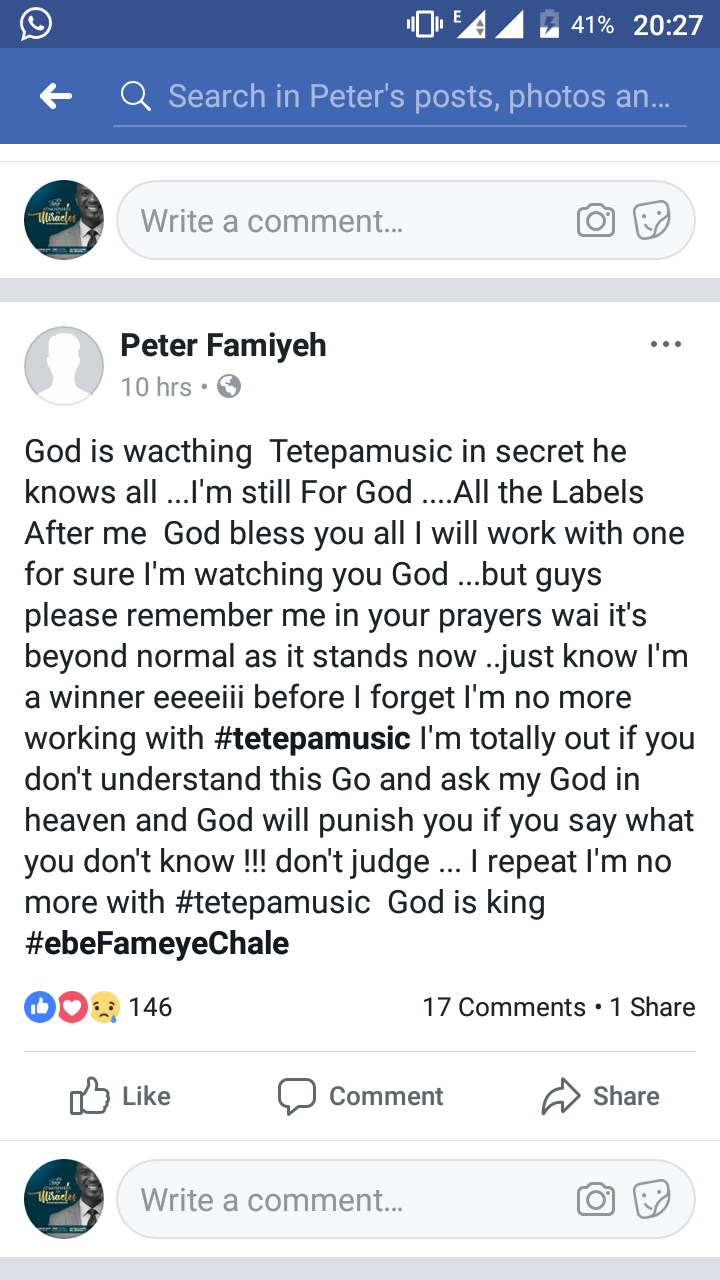 In the Facebook post, it is quite clear that Fameye took a swipe at his former label and both camps were not cool with each other when he finally exited ‘Tetepa’ Music.

The issue of taking money and failing to fulfill a contract is becoming a stain on Fameye as quiet recently, Awal also made strong allegations in a video message suggesting that Fameye made him pay GHS500 with the promise of featuring in Awal’s music video but Fameye failed too do so.
This led to the two getting at each other’s neck with Fameye also revealing he was no more interested in shooting the Music Video and that he was prepared to send Awal’s GH500.00 back to him.