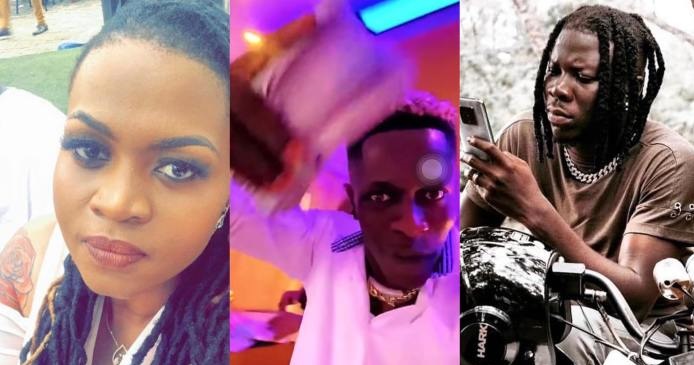 After Ayisha Modi described him as a poor person, award-winning Ghanaian musician, Shatta Wale has blasted her and her ‘godson’ Stonebwoy again by flaunting some wads of Joe Biden’s dollars this time.

It will be recalled that Shatta Wale and Ayisha Modi have been having a go at it since yesterday.

Both parties have said unprintable things against each other and thrown out a lot of wild allegations as well in the heat of the social media feud.

After listening to Ayisha Modi’s late-night diss on IG from yesterday, in a new video, the SM Movement has returned today with a lot of heat as he has been seen in a new video insulting Ayisha and her ‘godson’, Stonebwoy.

Seen flaunting some wads of US dollars, Shatta tells Ayisha and Stonebwoy to make good money because he and the SM crew have graduated from the music industry here in Ghana.

Trying so hard to belittle Ayisha, Shatta went on to state that Ayisha only knows how to play stupid games instead of focusing on ways to make money.

He went ahead to state that Ayisha can only be compared to t0ilet — an insult Ayisha rejects with every bone in her body.

WATCH: “Nana Tornado says Afia Schawarzegger intentionally sent him to buy malt only to come back to realise her chopping blanket man

0
Nana Tornado has made another allegation to support his claims that Afia Schwarzenegger is indeed cheap and easy to chop. READ ALSO: Mystery man who...
Read more
Showbiz

Controversial Accra FM presenter, Nana Romeo goes on a photo taking spree after landing in UK for the first time

0
Accra FM's Nana Romeo's social media handles are been bombarded with pictures of him in the United Kingdom after landing in Queen Elizabeth's kingdom...
Read more
Showbiz