Michael Owusu Addo, popularly known as Sarkodie in the Ghanaian entertainment and music scene has seen with the much contribution to the music industry of Ghana with his rap verses.

Today, Sarkodie has been inspiration as many people desire to become like the popular Ghanaian rapper.

This article shall cover everything you need to know about Sarkodie, his lifestyles, rap and music journey, wife, children, school attended and more.

Sarkodie is Ghanaians richest musician and the best rapper in Ghana and Africa. He was Michael Owusu Addo on the 10th July 1985. Sarkodie has a net worth of $17million and is engaged to Tracy Owusu with whom they are blessed with two children named Adalyn Owusu Addo and Michael Nana Yaw Addo Jnr.

Sarkodie is the fourth child of his parents and has three other siblings. He was raised in Tema, and attended Tema Methodist Day Senior High School after which he continued to IPMC, where he earned a degree in graphic design.

Sarkodie began his music career as an underground rapper,who rapped at events and shows. His skills and rap talents got him known after he participated in ‘Kasahare Level’ where he beat other competitors hands-down and emerged as the winner.

He met his former manager Duncan Williams of Duncwills Entertainment. He also met musicians like Edem and Castro, who introduced him to Hammer of The Last Two, a music producer.

After the competition he released his Makye single which got lots of artistes and has collaborated with artists like Wizkid, Ice Prince, Tiwa Savage, Banky W, Davido, Face Idibia, Fuse ODG, etc.

Below are the albums that were released by Sarkodie during his music career in Ghana.

Sarkodie has a net worth of $17million all from his rapping and shows he performed.

We have Sarkodie Reportedly used Strongman during his days at Sarkcess Music record label for pounding Fufu and washing of cars, meanwhile he was supposed to do Music

This Gossip was revealed by Nhyira fm presenter, who we are told ,is called Ruthy

In the video she said ” Strongman has a joint with Ice Prince , Ghanaians should Support him ,but for Sarkodie he did not help him ,he just used him for pounding Fufu and washing Cars”

Tour Dubai with Adansi tours with as low as GHS800

Well, It is yet to be confirmed if her allegations are true ,but sources say ,Ruthy is a close companion to Strongman , perhaps that culminated to Strongman’s low mileage during his days at Sarkcess Music

Ghanaian singer, Sheriff Gunu, has revealed recently that rapper, Sarkodie, does not reply her messages.

According to the singer who collaborated with Sarkodie on a hit song dubbed ‘Sherifa’  some years ago, Obidi has now neglected her.

She revealed in an interview that Sarkodie was supposed to feature on song with her. However, communication with him has broken down.

Sherifa revealed that the song in question was done six years ago but has not been released due to Sarkodie not minding her.

She stated that she sometimes had to wait for months before she could get a reply from Sarkodie, which shows that he obviously was not interested in the project.

Ghanaian musician,  Flyboy Geesus, has revealed that legendary rapper, Sarkodie, once begged him for a picture.

The musician posted a throwback picture of him and the Sarkcess Music boss with the caption:

“These things dey funny me too much. I will just collapse one day if y’all don’t stop sending me old pics. Who am I to complain when King @Sarkodie actually begged me for this picture?”

Read Also: Moesha Releases Her First Song And It Is Wack

According to Flyboy, Sarkodie was the one who begged for the photo of the two of them to be taken. 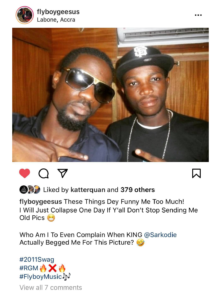 For those who don’t know, Flyboy was one of the biggest musicians from Tema until he disappeared from the music scene. He has however resurfaced with a new song.

A Cameroonian Rapper known as Ndukong Godlove Nfor, or by his stage name Jovi, seems to be looking for some cross country beef in Ghana all the way from Cameroon.

The rapper has thrown some heavy shade at Sarkodie by referring to him as a corrupt tax collector in Rap music whiles he, Jovi, is the Jesus of Rap music.

“When it comes to streams and Popularity Sarkodie is like Britney Spears and I am like Lauryn Hill . When it comes comes to SKILLS ? I am like Jesus and he is like the Tax Collector in the Bible . He was definitely Richer , Jesus had no Excuse to be POOR he is the son of God,”

It appears King Sark has found so much love in smoking Cigar. After putting his fans in disbelief when he was caught smoking some few months ago, Sarkodie has again been captured with a stick of Cigar in hand.

With the unlighted Cigar and glass of drink in hand and singing one of his songs, Sarkodie looked like lighting to smoke the stick moments after singing.

Some die hard fans look worried, already concluding that King Sark of all people is becoming an addictive smoker.

READ ALSO: Bridget Otoo ‘Murd3rs’ A Follower Who Asked If She Is A Lesbian With Her Reply

It seems that it is not only Shatta Wale who is being accused of not paying for his music Production. 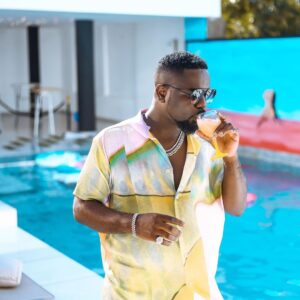 After MOG Beatz accused Shatta Wale of not paying him since 2018, another producer has also revealed a list of artists who still owe him production fees. The producer, known as King of Accra, published the list which included Ghanaian rap king Sarkodie, which should come as no surprise as the rapper is already known for being stingy nationwide. 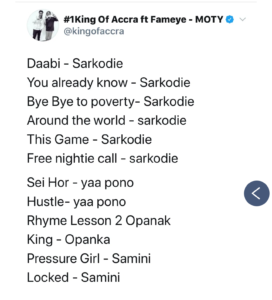 It seems that ‘Obidi’ failes to pay for production on his music on 6 occasions.

The likes of Samini, Yaa Pono and Opanka were also found in the list.

One of Yaa Pono’s UpTown Energy boys, Tha Blackboi has jumped to the defense of his boss, Yaa Pono as he has replied to Kumerican rappers, Phrimpong, King Paluta in addition to Shatta Wale in a diss song titled ‘Covid 21’.

It will be recalled that the two Kumasi-based rappers, Phrimpong and King Paluata yesterday dropped ‘That Line’ and ‘Murder Case’ respectively to diss Yaa Pono and express displeasure over some of the things he said about the Kumerica rappers in his diss song titled ‘Facts’.

Earlier in the day, he took to his Twitter page to announce that he will be dropping the song for Yaa Pono because he disrespected Kumasi-based rappers with a line in his diss track for Shatta Wale, Sarkodie, and Tinny.

There seems to be a brewing beef between Yaa Pono and his day one nigga, Sarkodie and Ghanaians would love how this beef will unfold especially whe these two are noted for their deep lyrical prowess.

Yaa Pono has insulted Sarkodie in his hot new diss song describing him as a fellow with a “rough head” – Yaa Pono is literally telling Sarkodie that he is an insane person.

It appears Yaa Pono is not too happy with how Sarkodie belittled Ghanaian rappers in his big collaboration with Khaligraph Jones and threfore bent to put some sense into Sarkodie’s empty head.

READ ALSO: “Jon boy, you pimped your girlifriend just to be signed onto a record label” – Yaa Pono destroys Shatta Wale in a new diss song

READ ALSO: “I have a clean heart, not a clean body” Celebrity mad man, Mona bobl3