The Government of Ghana in a press statement today has released the official date for the funeral rites of the former president, Jerry John Rawlings.

The statement was released via the Ministry Of Foreign Affairs to the international community and diplomatic missions.

The initial arrangement made for the funeral of the former president was postponed due to uncertainties between the Government, and the family of the former Pres. Jerry John Rawling

According to the press release sighted online, the late Jerry John Rawlings will be laid in state from 24th-26th January 2021 at the foyer of the Accra International Conference Center (AICC) from 9 am to 5 pm.

See the full statement below 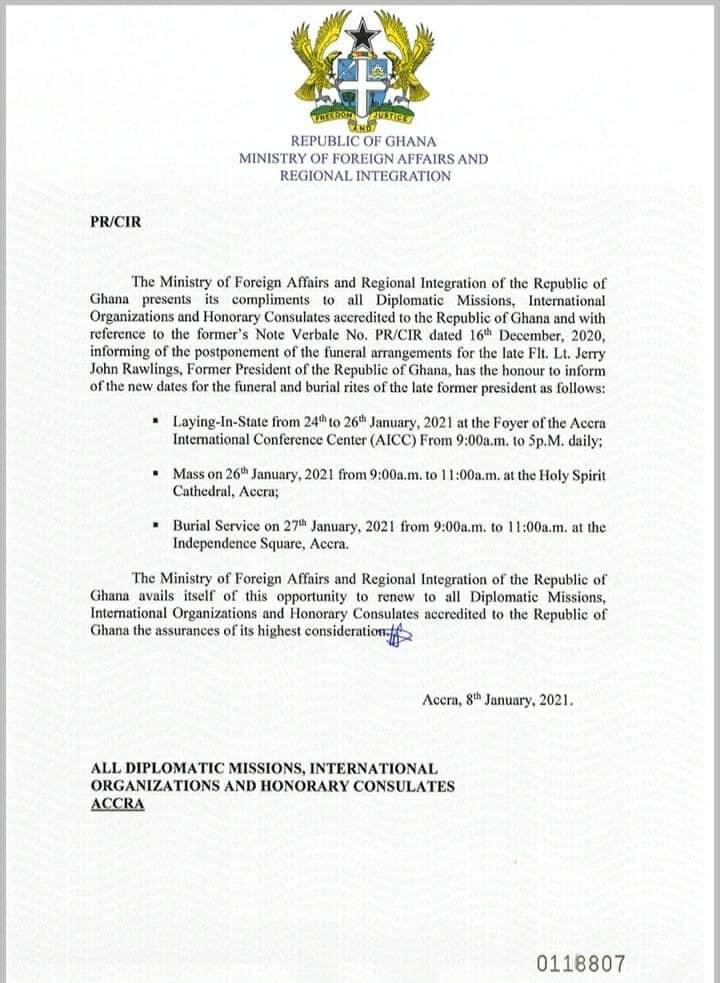 Lord
Previous articleAfia Schwarzenegger charges Menzgold customers to chase NAM 1 for their monies – Here is her reason
Next article#PunishBullDog: Fresh Campaign Calling For The Imprisonment Of Bulldog Over Comments He Made About President Akufo-Addo Started Online

0
Member of Parliament for Assin Central, Hon. Kennedy Ohene Agyapong has once again lashed out at Captain Smart and also accused him of fraud. The...
Read more
Politics

0
DJ Lord is one of the most renowned. Disc Jockeys in Ghana. He’s done an amazing job in the country when it comes to...
Read more

VIDEO: Afiah Schwarzenegger Slept With A Dog For $5,000 In Kumasi – Mzbel

0
Mzbel speaks in an interview on Kantanka Tv where she claimed Afia Schwarzenegger slept with a dog which belonged to certain chinese for $5,000...
Read more
Showbiz

Obrafour finally responds to Ayisha Modi in a new post

0
Following Ayisha Modi's revelation on The Delay Show that she invested USD45,000 into Obrafours's Album as far back 2011 without reaping a...
Read more
Showbiz

0
Kumawood superstar, Kwadwo Nkansah Lilwin, was spotted selling ‘koko’ in a new video that has popped up online.