Veteran Ghanaian rapper, Nii Addo Quaynor, who is known better by his stage name Tinny, has announced that he will be releasing a diss track aimed at fellow rapper, Yaa Pono.

Tinny told his fans to anticipate the new track as he looks set to end the career of Yaa Pono once and for all. 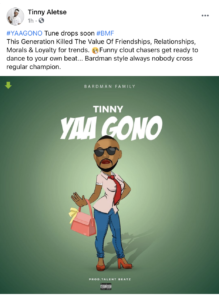