Today marks exactly one year when a very stup!d young man who had no respect for authority and even the President, Nana Addo Danquah Akuffor Addo took a bold step to pass his excreta in from of the Flagatsaff house, the seat of government.

It wasn’t unknown the mental state of this idiot who was captured squatting and doing the unthinkable, even along the busy road.

The identity of the unknown man still remains a mystery but since the issue became a major talking point on social media, we have decided to refresh your memory on the incident.

Take a look at the photo: 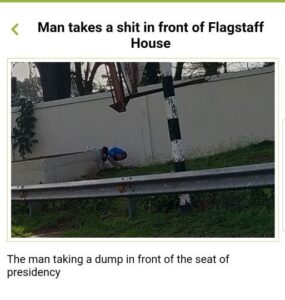