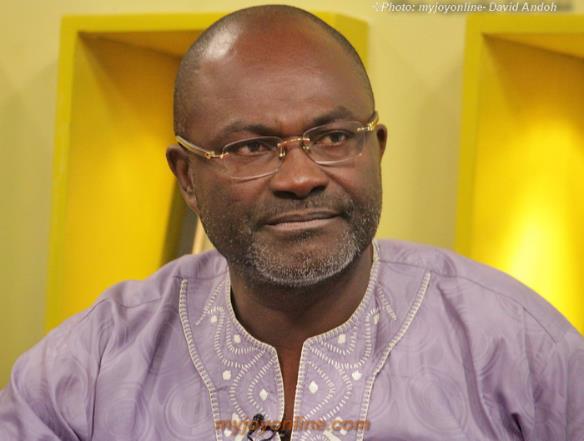 is Honourable Kennedy Agyapong, the Member of Parliament of Assin North has over the years been very loud and outspoken on pertinent issues in this country. He just does not tackle the issues but attack culprits harshly by exposing their corrupt deeds.
The outspoken member of parliament is loved by many for his no-nonsense style and boldness. Known for picking fights with prominent people, we give you a list of 5 top personalities Kennedy Agyapong has had banters with.

1. Kofi Adams
Kennedy Agyapong and Kofi Adams, then NDC National Organiser traded insults on live TV in 2015. The trade of insults which almost resulted in a fist exchange had the duo pelting unsavoury words against each other. Kennedy Agyapong described Kofi Adams as a poor teacher who is not qualified to even be his boy whiles Kofi Adams tagged Kennedy Agyapong as a cocaine dealer. Nothing could separate the two including the host, Omanhene Kwabena Asante until they were taken off air by the station.

2. Anas Aremeyaw Anas
The fight between Kennedy Agyapong and Anas began when the Member of Parliament warned the latter not to show an investigative piece dubbed Number 12 about the Ghana Football Asociation with former GFA President, Kwesi Nyantakyi at the Centre of the expose. He threatened to expose Anas should he go ahead to show the investigative piece as he Anas himself was not clean and had engaged in numerous corrupt practices. Anas and his Tiger Eye PI, however, defied the maverick Member of Parliament and showed the investigative piece which sparked a national outcry with many calling for the head of the former GFA president.

Kennedy Agyapong then put up his own version of investigative piece dubbed Who Watches Over The Watchman which contained corrupt practices engaged by the investigative journo which was shown at Kencity premises with the aim of exposing Anas Aremeyaw to Ghanaians and the world.
From Anas engaging in galamsey to forcibly acquiring lands from its legitimate owners and editing and deleting parts of videos to suit his motive were some of the allegations levelled against Anas.

The showdown between Kennedy Agyapong and Anas took another twist when Kennedy Agyapong was accused of been involved in the assassination of Ahmed Suale, a member of the Tiger Eye PI who was very instrumental in exposing the GFA and Kwesi Nyantakyi after the member of parliament showed Ahmed's picture on live TV and imploring people to beat him up anytime he comes near the Kencity premises.

As to who was the victor and the loser in this 'war', you can judge for yourself.

As usual and expected of Kennedy Agyapong, he refuted in a very strong manner by insulting Kevin Taylor and his father on countless occasions on several media platforms including NET 2 TV and Asempa FM.

4. Badu Kobi
Prophet Badu Kobi had his first share of Kennedy Agyapong's wrath when Kenedy Agyapong threatened to expose the prophet of God for pelting lies and insulting President Akuffo Addo on countless occasions in his church.
Mr Kennedy Agyapong subsequently made wild revelations about Prophet Badu Kobi which include engaging in sexual relationships with some of his church members, indoctrinating his members with fear and also car theft and also importing cars into the country without paying duty.

The maverick member of parliament subsequently led security operatives to the home of Prophet Badu Kobi's house to take captive of the alleged stolen cars.
According to Mr. Agyapong, Prophet Badu Kobi has called to apologise and begged him to seize fire, a decision he has agreed to exercise on condition that Badu Kobi would use the same medium he openly used to attack President Akuffo Addo to apologise to the President.
He has however declared that he will ensure that Badu Kobi pays all the duties of the cars which were not paid for.

5. Bishop 'Angel' Daniel Obinim
The beef between Hon Kennedy Agyapong and the self-styled Angel began when the member of parliament lambasted Prophet Obinim for claiming to have a cure for the Novel coronavirus even though Bishop Obinim was debunking rumours that he had developed the cure for the virus and thus quashed such rumours as such.

Angel Obinim was however not impressed with the Kennedy Agyapong's outburst and descended heavily on the lawmaker for not getting his facts right about his comments and also pelting lies about him.

Unhappy with the comments, Kennedy Agyapong struck back and threatened to expose Obinim of his corrupt dealings.
He subsequently made presentations with proofs of 'Angel' Obinim engaging in money laundering, gold theft and having numerous sexual encounters with his church members
Mr Agyapong proclaimed that he will make sure Bishop Obinim goes to jail. Bishop Obinim has however denied some of the allegations levelled against him by the lawmaker including that of a video involving him of a side chick which he revealed as his daughter born out of wedlock.

Yawa! Twitter Turn On Sarkodie As They Troll Him Mercilessly For Receiving Allege ‘Fake’ UN/Kofi Annan Award From Dr. Fordjour

0
One would think that tweeps will be charitable and sympathize with the likes of Sarkodie and many other top Ghanaian celebrities who were allegedly...
Read more
Showbiz

0
Looking for the richest people in Ghana? Well no need to search anymore for we got you covered with the list of billionaires in...
Read more