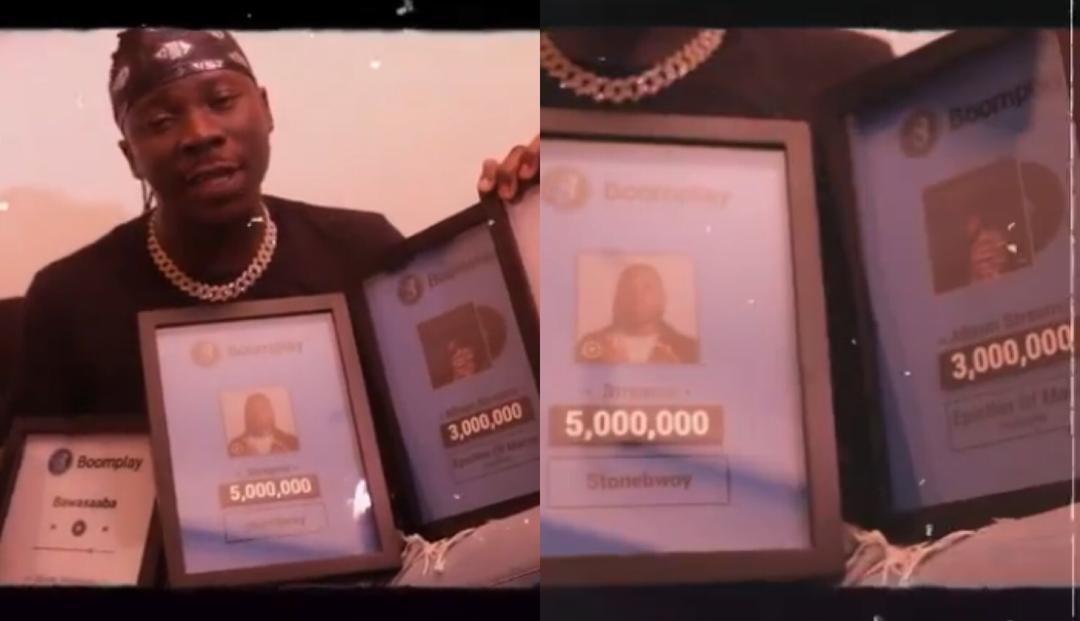 Boomplay Music is a media streaming and download service developed by Transnet Music Limited. The service was first launched in Nigeria in 2015 by TECNO Mobile, Just like other platforms like Audiomack and Spotify, Boomplay give out plaques to musicians whose song hit high numbers of streams, normally from 500,000 and above.

READ ALSO: Dead 12-year-old girl resurrects, as her body is being prepared for funeral

In a video sighted on Instagram, Stonebwoy was seen holding his plaques and said that he was supposed to receive them a long time ago but he is still grateful for them arriving, expressing appreciation to his loyal fans for the love and support.

The “Putuu” hitmaker has been one of the promising musicians in Africa. With several bangers and sensational kinds of music. Stonebwoy has won the hearts of many both locally and internationally. He never seems to disappoint his fans.

Stonebwoy has been in the news lately for so many bad reasons. Firstly was his physical fight with Sarkodie’s manager during the rehearsal towards the BlackLove Virtual Concert at the Black Star Square.

Secondly, his godfather, Samini also threatened to expose him for claiming that he never contributed to his career. Upon all these, Stonebwoy is still loved by many.

0
Angel Broadcasting News is reporting that Mahama has stepped down from the 2020 Presidential race. The radio station reported through their news anchor, Kofi Adoma...
Read more
Showbiz

0
According to the popular dancer who shared a video of himself in handcuffs, he has been arrested and handcuffed on a metal post at...
Read more
Showbiz

0
Ghanaian actor Aaron Adatsi aka Cyril and his baby mama, Eyram have taken their love for each other to a super exciting level in...
Read more