Member of Parliament for Assin Central, Kennedy Agyapong, has stated that, contrary to popular belief that politicians are corrupt, it is rather the workers in Ghana who are really corrupt.

According to the outspoken politician and businessman, there are workers who actually steal from their employers and amass wealth. These people would then turn around to accuse politicians of being corrupt.

He revealed that he got a worker of his who was conniving with thieves arrested by the police. 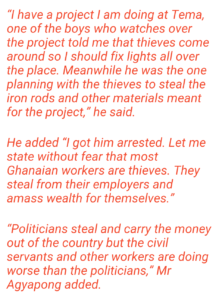